How to try to fix your own broken code

When starting to learn to code, it doesn’t take long to realise that it’s very hard to write software that works. When software doesn’t work, we say it has a bug (see how to report bugs in Mu for the world’s very first computer bug).

To be honest, professional software developers are just as capable of writing buggy software as a beginner. The only difference is in the type of bug they create.

Beginner programmers make beginner mistakes like typing the wrong instructions, setting out code in the wrong way (causing a syntax error) or simply asking the computer to do something impossible.

Professional programmers know the instructions that will work, understand how to write their code correctly and appreciate the capabilities of a computer. However, they often have blind spots, don’t think through the full implications of their code and can over-complicate the way they write software (thus making it difficult to work out what’s gone wrong).

The very best programmers are humble enough to acknowledge their ignorance (and are fearless to ask questions when something is unclear), pragmatic enough to accommodate and compromise (if it leads to wider positive progress) and value simplicity in style, structure and solution (it’s extraordinarily hard to solve problems with simplicity, and is the sign of a great programmer).

With this in mind, there are certain thoughts, habits and processes you can adopt to help you fix your inevitably broken code (everyone’s code has bugs, and those who claim otherwise are deluded).

So, the most likely cause of the bug is that you have done something wrong in your code.

Upon reflection, this is a good thing, becuase more often than not, you can also fix it by reading your code carefully, working out how what you wrote isn’t what you really meant to write, and then correcting things.

Don’t Just Sit There, Do Something!

The usual way you’ll learn something has gone wrong is with an error message. Unfortunately, to non-programmers error messages might as well look like this: 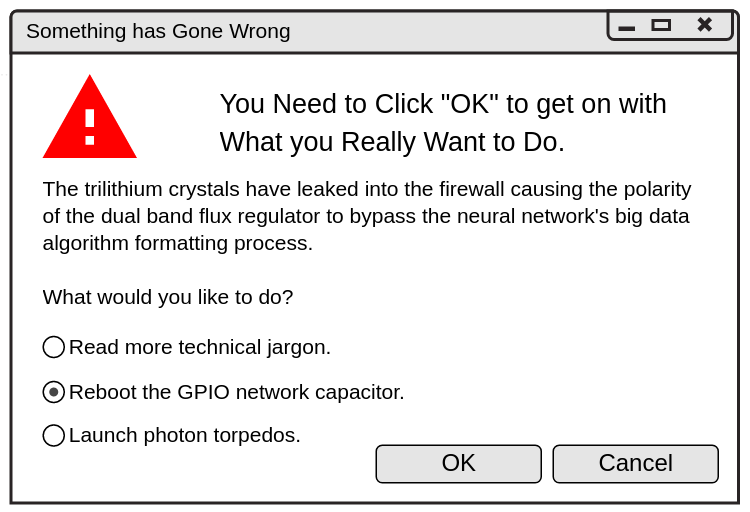 As a beginner programmer these sorts of message may, at first, appear intimidating and confusing. Remember, DON’T PANIC! Here’s how to make sense of such messages.

There are different sorts of error and it’s helpful to know which one you’re dealing with. Take a little bit of time to read the message. It could be a very long message but you should start at the bottom. Such messages are called stack traces and it’ll look something like this:

In this instance we can see Python complaining about a SyntaxError, although there are many different types of error (in technical parlance these are called “exceptions”), four of which are listed below:

All the various exceptions (remember, that’s what we call it when Python indicates something has gone wrong) built into Python are documented on Python’s website.

So you may have found an exception at the end of the long stack trace. Instead of putting your hand up, waiting for the teacher and then saying, “I have an error”, why not look up what the exception may mean (use the link above). Alternatively, why not type “Python” followed by the name of the exception and the message that comes with it into Google..?

Welcome to programming, where most of your time is spent trying to make sense of why stuff doesn’t work as you expected.

The most important aspect of this exercise is that you build up a picture of what the program was doing, why it was doing it and how it got into a state which caused it to fail.

If the exception at the end of your stack trace doesn’t help you work out the answers to these questions then work backwards up the stack trace to learn what steps Python took to get into the problematic end state. It’s a bit like the computer is presenting you with a list like this:

As mentioned, starting at the bottom tells you what caused the failure, but you may need to read backwards to work out what led to the problem.

Python is trying to be as helpful as possible by giving you absolutely all the information you may need in order to fix the problem. This includes the type of exception (so you know what the problem actually is), perhaps a helpful message and then a filename and line number.

Talk to the Rubber Duck

If you’re still struggling, talk to the rubber duck. 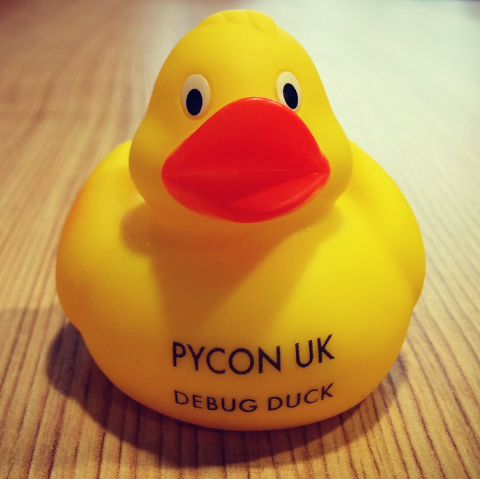 Rubber Duck debugging is a great technique for seeing things that may at first not seem obvious. It simply involves explaining each line of code where the problem is found to an imaginary programmer represented by a rubber duck (you don’t have to use a rubber duck, and it’s probably best if you imagine yourself explaining things to the duck rather than actually talk to a rubber duck… that would look weird).

This simple trick is a great way to shift your perspective to allow you to see things you at first missed. For example, “First I set X to 15, then I loop over the list X number of times so all the values are added to the total. Dammit. The total is never reset to zero… no wonder it was so high. Why the hell didn’t I see that earlier..?” is a typical way this sort of thing plays out.

So you’ve looked up the exception, checked the code, rubber ducked for ten minutes and the damn thing still won’t work properly. Now what?

So, learn to ask questions in the right sort of a way.

“It doesn’t work. What do I do?” is not going to be answered (at least in a polite way).

“I have a ValueError when I try to set the score in my game, but I don’t know why I keep getting negative numbers on line 123 of my_game.py” is much more specific, sets a context and tells people where they can help.

If all else fails, there’s always this handy flow chart from the comic XKCD: 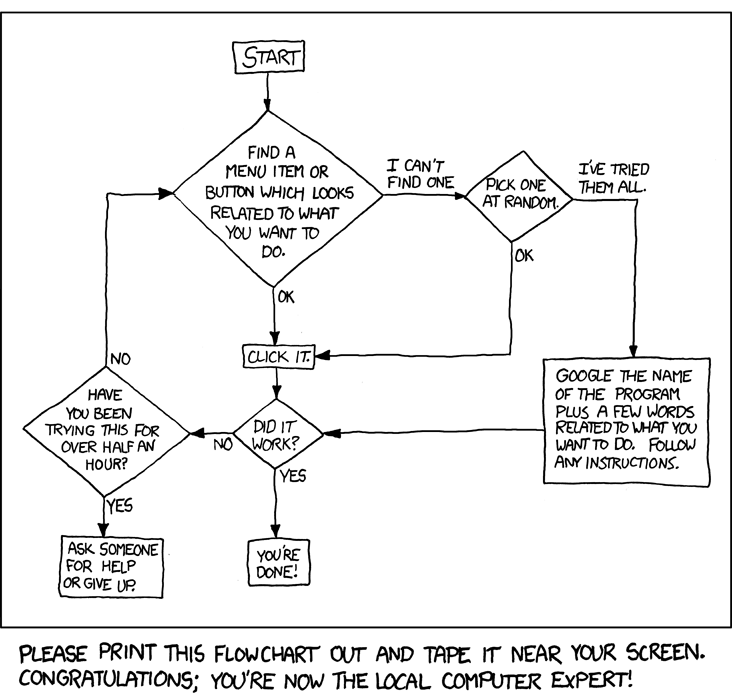 Debugging code can be frustrating, time consuming and disheartening. However, once your program works, the elation you will feel is definitely worth it.